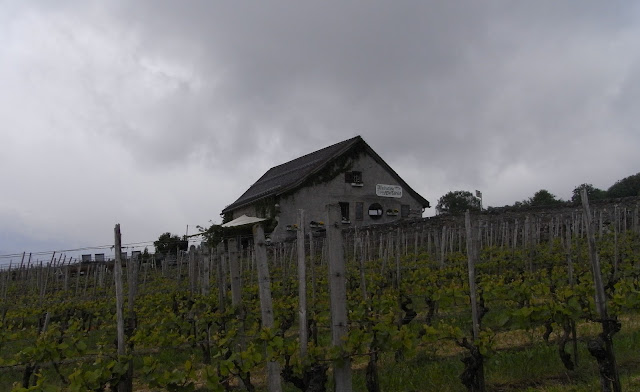 So far its been a long exploration throughout different stages spreading from the Adolecents, to Middle-Agers and those visits we've already paid to various Grisons wineries including Cicero Weinbau, Weingut Donatsch, Weinbau Christian Hermann and the Gantenbeins. Today this extended trilogy will find a fortunate and blissful end with my visit impressions of Weingut Eichholz (Irene Grünenferlder) in Jenins, Weinbau Annatina Pelizzatti also in Jenins and finally the very surprising visit of Thomas Studach's winery in Malans. Let's begin with the current releases of Weingut Eichholz ...

Nearly two decades ago Irene Grünenfelder, a former teacher and journalist, decided to establish a winery in the Eichholz meadow near the village of Jenins. For several years she is on of the most prominent and determined characters in the Grisons wine business. Especially since her Eichholz Pinot Noir won a prestigious wine award in 2004. Pinot Noir is without a doubt the varietal of the estate. Not to mention her in populatity growing Sauvignon Blanc and a few other white wines made from Burgundian grape varietals. 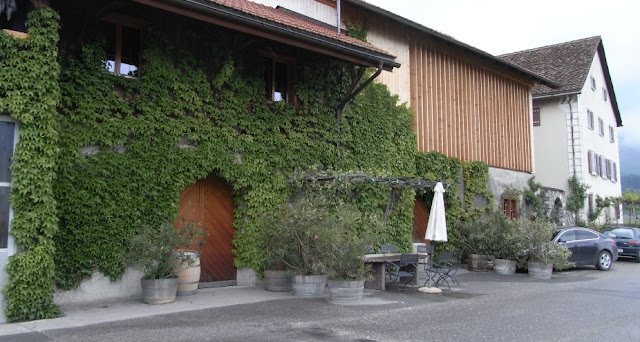 At first we have tasted those last mentioned white ones. The Pinot Blanc 2012 and Chardonnay 2011 were very present, juvenile and quite fair wines, but nowhere near the quality of most of the other really impressive crus produced by Irene Grünenfelder. The first really decent bright spot was the Sauvignon Blanc 2012 which was aged in steel tanks and large oak barrels. The nose of this juvenile wine seemed pretty reserved and slightly influenced by oak characteristics. The taste was far more present. I got fresh and slightly creamy exotic fruit flavours and plenty of freshness. No superimposed grassy or gooseberry flavours at all. More the silent and cultivated type of Sauvignon Blanc I suppose. Not a show-off squaller. Surely decent **** stuff. The next wine was an aged version of the Sauvignon. Either 2006 or 2007. Not really sure. This one was full of aged exotic flavours, far more mineral, a bit green'ish and well equipped with not so gentle smoke. A far more expressive Sauvignon with far more edges and evetually with good polarisation capabilities. I enjoyed it! Could be decent **** stuff alongside hearty fish dishes.

The entry-level Pinot Noir 2011 from mainly Mariafeld clones was a rather cool and smoky Blauburgunder type with classical references. It had finesse and lightness as well as fresh fruit flavours. Density, smoothness and complexity weren't its strong suit – which might be problematic to achieve with Mariafeld clones. To me more like a so-so *** entry level Pinot Noir which is definitely suitable for everyday consumption. The Pinot Noir Alte Reben (V.V.) 2011 spoke a rather different language! This in open wood casks fermented and small oak hogsheads aged Pinot Noir from Wädenswil clones was far more concentrated and complex. It had a tart and earthy character with fully ripe and lush dark cherry flavours. A certain charm wasn't lacking either. The stronger alcohol punch might have been a bit too rich for me. The freshness of this Pinot was able to balance this stronger punch. In given time this will settle (a bit) anyway. For me a most definitely decent **** Pinot Noir. Our final wine was the Pinot Noir Eichholz 2011 (Burgundian Pinot clones) which was fermented and aged in predominantly new oak. This pretty dark Pinot was very impressive indeed. It combined a firm elegant fresh character with quite a lot of power, an earthy mineral "imprint" and almost overwhelming concentration. Right now the oak flavours seemed a bit strong. There were a lot of very ripe dark cherry flavours and an overall far more balanced structure (compared to the Alte Reben Pinot Noir). No alcohol issues either! The length of the finish and its strong finesse were the convincing cornerstones of this intellectually challenging and downright pleasing - in a few years - Pinot Noir. Absolutely a very decent ***** Pinot which will need its given time to evolve properly! 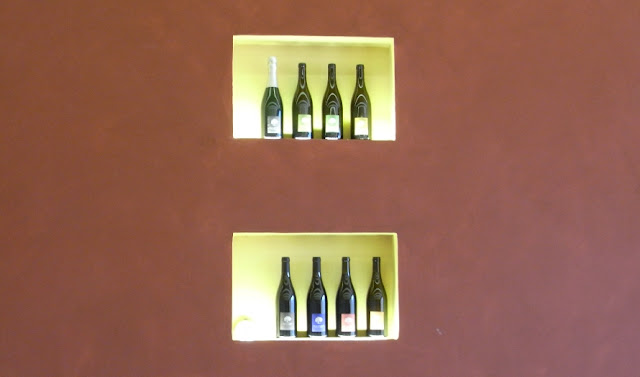 After the Eichholz tasting we went straight over to the actual village of Jenins to pay our visit to Annatina Pelizzatti's winery to have a sip of her far more charming, smooth and fruitful Pinot & Co. interpretations. Annatina manages her small wine estate since 1997. The annual production is approx. 20000 bottles from 3,5 hectares land + some purchased grape material for the lower - or better written "not so high" - qualities. Besides a variety of already bottled wines we once again had the opportunity, a very informative one, to taste a couple of barrel samples.

The first intriguing and really flabbergasting wine was Annatina's Schillerwein from 2012. Schillerwein is a kind of rosé. The only difference is the joint fermentation of red and white grape varietals. Normally this results in something absolutely out of the question and beyond good and evil. Not in this case! This Schillerwein (80% Pinot Noir and 20% Pinot Blanc) had a colourful and lush hue, a beautifully precise strawberry nose and refined, clear, fresh and not so weak flavours of strawberries and perhaps a few raspberries. Admittedly it wasn't an over-complex wine, but a really well made and super quaffable one. I've never imagined to give such a score to a rosé: totally decent **** and joy providing stuff! The next wine was the entry level Pinot Noir Jenins 2012. This Pinot was a clear, cooler, a bit smoky, overall charming and not too simple little fellow. It was far beyond from being simple or even watery. The fruit flavours were absolutely precise and clear! Just a uncomplicated drinking - not thinking - Pinot Noir for relatively little money and decent **** quality. The Pinot Noir Barrique 2011 presented itself far more dense, more influenced by refined oak flavours, a beautiful light structure and full of bright elegant fruit flavours. The supporting act were the mineral characteristics seemed very compatible and refined, too. The main adantage of this Pinot was its clear and animating fruit combined with a non-challenging complexity, which should not to be confused with simplicity, and a pure long lasting elegant touch! Very well composed Pinot experience! For me a very decent ***** wine. 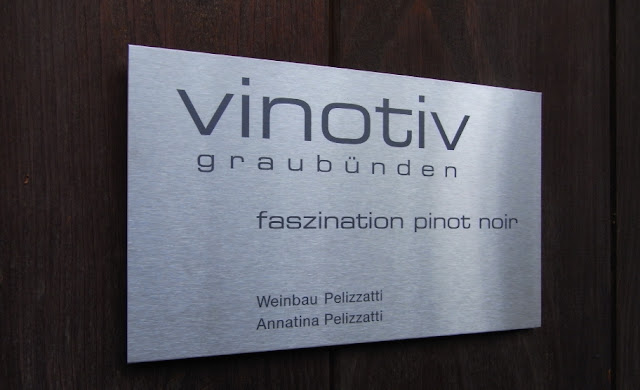 As I have already mentioned – the tasting session found its continuation in Annatina's barrel cellar! Besides the rather educating and totally promising sample-tastings of the Pinot Noir Barrique and Chardonnay Barrique 2012 from new and used oak barrels – educating in terms of analysing the differences of ageing influences – we had the chance to taste the new Pinot Noir Eichholz (lieu-dit) 2012 and another new Pinot Noir 2012 from steep schist slopes. The Pinot Noir Eichholz 2012 is still ageing in one large oak barrel. The nose was still a bit reductive and stinky, however my palate got impressed with even clearer, leaner and more precise fruit flavours. Above all that there was a fine and very suitable mineral touch at hand ... or palate of course. It was already a very accessible and animating wine. I surely see a very decent future for this one! The Pinot Noir 2012 from steep schist slopes was aged in small used oak barrels and appeared far more serious, a bit gaunt, tart, spicy and filled up with expressive lean mineral characteristics. It probably wasn't as charming as the other Pinots … anyway a really impressive cool style and more serious Pinot Noir with a very promising future indeed!

In conclusion: elegant, fruitful, accessible Pinot Noirs with plenty of lightness and charm! 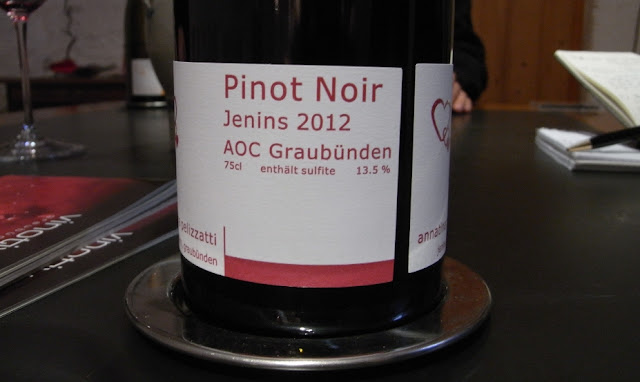 Our final tasting session happened once again in a typical garage winery. Well, actually it happened in the family residence of Thomas Studach during one of his customer pick-up days and not in the actual cellar. Little by little Thomas Studach established his own winery between 1988 and 1991 in the village of Malans. After two decades he produces some of the most sought after wines in all of Switzerland. This sounds like a typical wine marketing exaggeration – but in this case it appears to be absolutely true! And I do have to confess there are a couple of justified reasons for that. First tiny production (approx. 3 hectares), second low yields, third good concentration and forth - by far the important - fantastic quality! Whilst our entertaining stay at Studach's residence we tasted the complete product range of 4 wines:

At the beginning we were indulged with the Malanser Chardonnay 2011. This one presented itself super lively, highly expressive, very concentrated and maybe a bit lush and ample without showing a single trace of buttery obesity or any kind of airs and graces. The fruit flavours were really expressive, somehow totally charming and most important: glacier crystal clear. In addition there was plenty of mineral support going on in the background. The 50% new oak were well integrated, too. What else can I write? Very clear, very seductive, non Burgundy imitating and downright pleasing Chardonnay with fantastic ****** qualities. Just great, however for me not the best wine from his range. But first it was time for the Malanser Completer 2011. As I have already mentioned in Part 3.1 Weingut Donatsch: Completer is the super scarce autochthonous white grape varietal of Grisons. Studach's Completer appeared a bit soft-creamy (more influenced by oak), definitely pretty salty and overall more accessible and not as profoundly gripping as Donatsch's version. There was far more “roundness” and volume to this wine. Anyway, without any doubt a decent **** white with straight indigenous character. 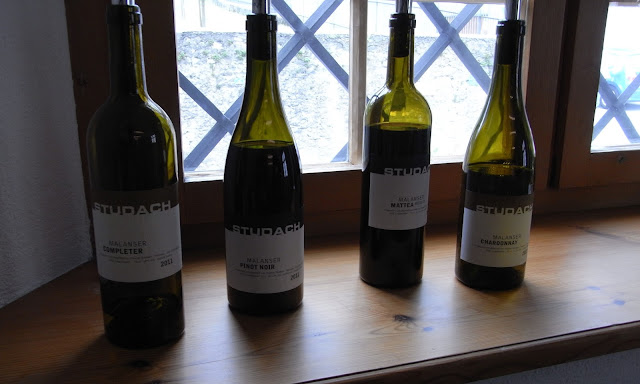 The next wine was the Malanser Pinot Noir 2011. I do not intend to write too much about this one. Just give it a try if you ever got the chance to do so. This Pinot Noir was such a super clear, profoundly impressive, highly elegant, irritatingly seductive, very seriously fruitful, well concentrated and at the same time lean, very fresh, super succulent and silky Pinot which I don't want to reduce this Pinot to such a feature dropping - which I've just performed. Very important: no booze or oak issues either. Probably not the edgy kind of Pinot Noir with plenty of super special characteristics. Don't get me wrong! This does not imply any poverty of demand or intellectual inspiration. I just wanted to highlight the perfectionist approach (or attempt) of Thomas Studach's Pinot. Whatever … I better stop the blather! More of that fantastic ****** stuff in future, please! There was one final wine to come after this beautiful piece of Pinot Noir. It was the Mattea 2011. A 100% Merlot from Malans. This Merlot had the clear and almost spotless clean character which reminded me of Merlots from Ticino. In particular I enjoyed the very precise dark merlot'ish fruit flavours and herbal characteristics as well as the pronounced strength within its well defined muscular body and structure. Simply a very decent ***** Alpine Merlot. Unfortunately there is a sad story behind this wine. Its future has been cancelled! In the future it will be substituted by the autochthonous player: Completer! 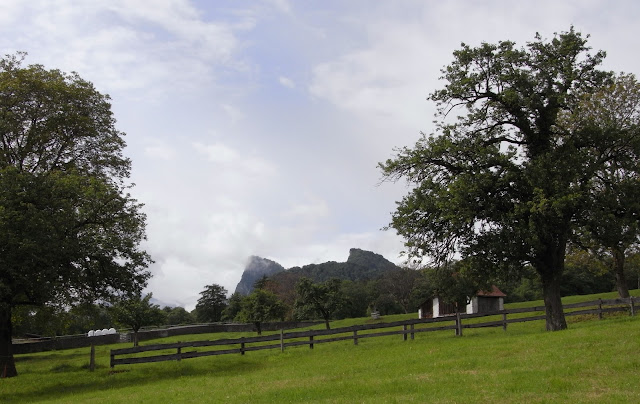 What else is still to be written? Only one thing: Again - Thanks very much for the hospitality and your downright impressive wines Signuradi! It was a great experience!
Posted by Oh Dae-su at 17:15