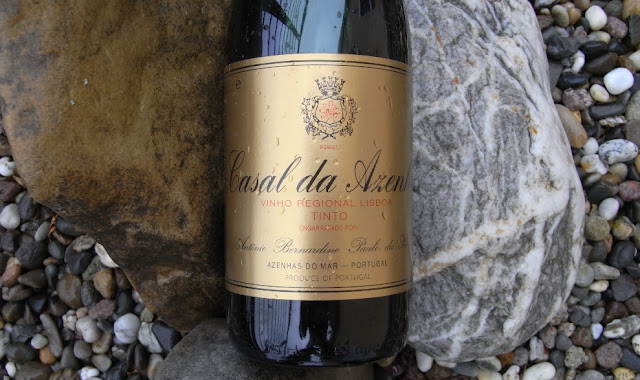 My tongue's voyage to explore wine-growing regions with hyper autochthonous and scarcely existing grape varietals is about to come to an end. The origins of my final wine are the sandy dunes of Sintra in Colares region north-west of Lisbon. The home to the legendary and nowadays super scare Ramisco grape! Only a very few hectares of those sinkholed pre-phylloxera vines are left in Colares. Why sinkholed, and why where those vines able to survive? Well, sinkholed because all vines in this region of the Extremadura need protection from the salty winds which are constantly „crashing“ in from the neighboring Atlantic. And survived? Jus because of the sandy soils and cliff'y terrain on Sintra's coast which prevented the phylloxera bug from spreading. So, let's recap: Today I will have wine from very old vines, which was produced by António Bernardino Paulo da Silva, a respectfully well aged vintner, which is "ultimately" - at least at the moment - a downright infant! The frequent absorbers of my blog might be aware of such ill guided practices in case of António Bernardino Paulo da Silva wines. So, let’s have a first sip of toady’s “Happening Now Tasting” wine:

Nose: mostly steady, coal or charcoal – not quite sure – seems to gain nasal territory, some earthiness as well, the herbal touch (primarily fresh cut lovage and parsley) is getting stronger, too

Taste: still quite a bi...y, actually mostly shut, more and more salty and iodine, acid is biting tremedously, diffuse herbal touch is getting more elaborate however equally diffuse, somehow even the fruit seems to get brighter, warmer and even a bit deliquescent (!?) at the moment … I don't no … wounderfully weird wine

Nose: fruit seems to evolve at the moment, still pitch black black currant, but much more vital than yesterday; a bit more peppery and perhaps even ethereal spice combinded with distinct fragrances of beef soup; surely more open than yesterday

Taste: rejoice the acid is getting a hint more gentle and integrative – still very lively without being too demanding; the fruit seems more soft, ripe, warmer, sweet (cornflake'ish sweetnes) and overall far more open, the herbal touch appears very much the same – perhaps a bit more peppery, its iodine saltiness seems to be a bit in retreat; more lukewarm character with plenty remaining sternness … faceing an interesting (and postitive) direction

Nose: very much the same, moss and green tobacco seem to fade a lil, the beef (soup) and other evolving animal'istic odours seem to be stable, pitch black currant is still pretty strong

Taste: here too, very similar impressions; perhaps the fruit is getting a bit darker and hints of diffuse animal-like flavours might evolve (let't check tomorrow); still very fresh and vital concerning many aspects …

No substantial changes at all! Hence - enough blather about this one. Downright beautifully shifty and decent **** character wien with potential for more in the decades ahead!
Posted by Oh Dae-su at 20:18