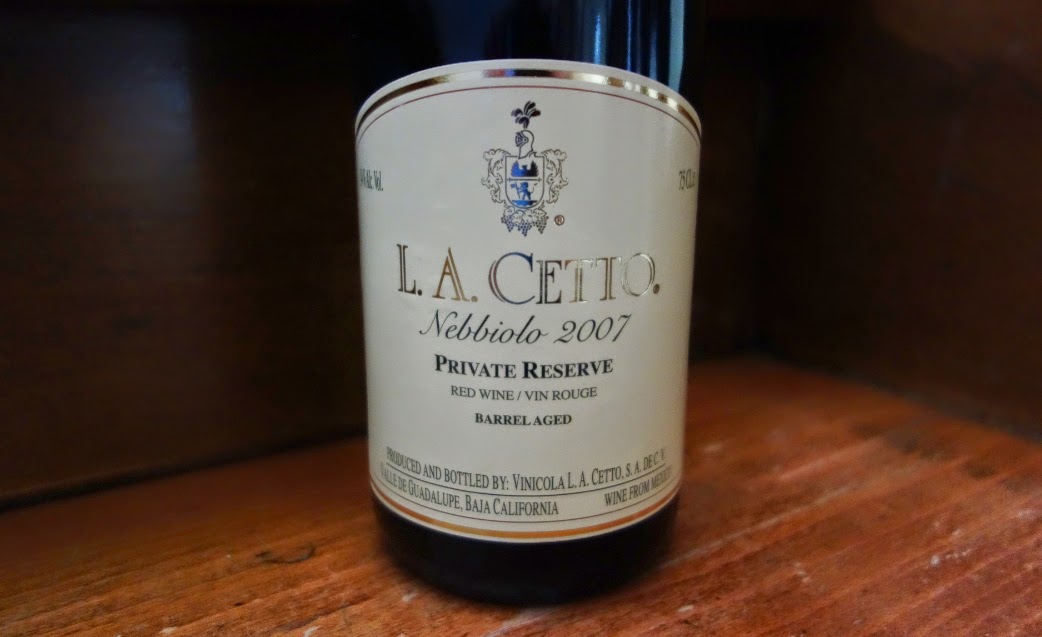 It’s been a while since my last Mexican wine. Last time it was a Petite Sirah from Baja’s largest and most renowend wine producer L.A. Cetto. This time the actual producer remains unchanged. Only grape variety is about to differ. To differ to the “extreme”! Well, probably not extreme, but for a European it is a slightly special thing to drink Reserve Nebbiolo from Mexico. I know, I know! Sounds a bit unreceptive and insular! You got me! All those years of tasting “weird”, or better put: peculiar, wines and there we have it: My true character!  … Naaa, just kidding! I’ve really been looking forward to this Nebbiolo Private Reserve 2007 from L. A. Cetto. I just didn’t know how to fill up the lines, because unfortunately there is not so much input material to learn about this Nebbiolo. The “raw material” for this typical Old-World grape varietal wine was produced in Valle de Guadaloupe on the southern Californian peninsula. Then it has been fermented for up to 20 days and aged for another 14 months in mostly used French barriques. Let’s check it out …

Colour: rather tinted for a Nebbiolo, quite murky and to the rim pretty lush in colour and even a bit transparent

Nose: no picture book Nebbiolo nose apart of some diffuse and a bit mild seeming rugged animalistic odours; dark juicy cherries and brambles, traces of charcoal, rather sweet and accessible at the moment; not really complex or inspirationally occupying

Taste: really dusty, if not sandy, tannins, absolutely not stern or molto difficile; right now I am not sure what to think about those detected blurry flavours, besides dried tomatoes and dried cherries I get plenty of Hershey’s Choco Sauce and traces of appealing red currant; there are not a lot of Nebbiolo feelings being transmitted from my tongue to the brain, however there might be an alert transmission: possible cork flaw, a minor on – if so … got to check this later to be sure

Taste: tart liquorice here, too; besides that a more determined development towards a sweeter and longer finish; dustiness including a truly unusual texture is remaining, the fruitful character of this wine is even more obvious than before, maybe there are some minimally Piedmont-nebbiolo’ish features evolving, if so they could be described as pretty monotonous and mildly savage! By the way … my cork flaw angst is still pending, however more retrenching at the moment

Nose: once again a bit more diffuse animal odour, diffuse is an appropriate term, the nose really seems pretty blurry and even a bit lame; not that impressive at all

Taste: the wade in my mouth is moisturizing –at least a bit, the tannin impression isn’t that nastily dusty anymore, some earthy aromas are developing as well; beyond all that no mentionable substantial changes

Nose: overall more life, still pretty much diffuse and mostly far away from any typical features of Nebbiolo, perhaps the nicely developed character of dried foliage could be some indication for Nebbiolo

Taste: more, however for Nebbiolo rather atypical, splendour; the characteristics of bramble seems more sugary and juicer; besides that I am getting more flavours of caramel, old fashioned salty liquorice-cough-candies and really viscid soy sauce; improvement has happened overnight, I am afraid my sudden fatigue came a bit too early yesterday

Nothing really new happened in the past two hours, still very unusual and fruitful Nebbiolo

Conclusion: Give it a lot of air, let the sandy texture get a rest, be open for a lot of dark fruit flavours and most of all don't expect a conventional Piedmontese Nebbiolo! Yesterday, I had my problems to get comfortable with this style of Nebbiolo. Today, I am more pleased. That is why I am in favour of a marginal decent ****
Posted by Oh Dae-su at 20:26