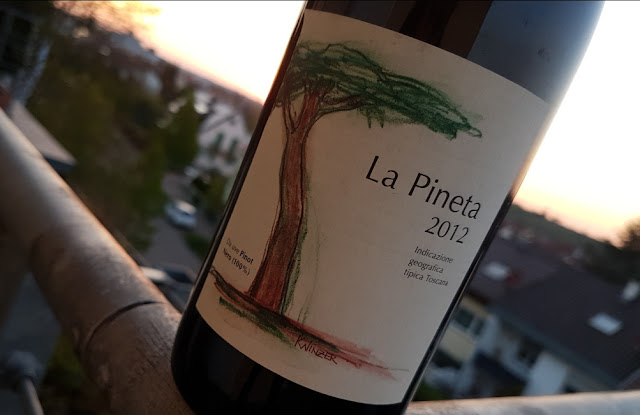 Tasting – and sometimes even drinking, yes – quite a lot (or too much) Pinot Noirs year in, year out, one might be endangered to fall for a feeling of certain indifference or even tedium. Emphasis on the term "might“, of course! Don't worry, I will never truely get bored of Pinot Noir. I am absolutely certain of that! I'm aiming to get somewhere else. Sometimes you might be privileged to have something in your glass (in this case in a not so much loved Zalto) which was different! Different in good! I like different! Actually, I pretty much adore different because it spices up life and conveys you to new places/directions etc. This different, this different in good … in very damn good actually, I had in my very Zalto about a month ago. I am not shy to admid that I do like Italian Pinot Noirs from Lombardia, Trentino, Alto Adige or even those rather pithy, animal'istic, complicated (especially during childhood and teenage years), acidic and tannic fellows from Tuscany as well as Umbria. The Pinot I am refering today originated from Tuscany ... without being too pithy, rustic or whatsoever. To be more precise it originated from Tuscany's heart Chianti ... although my La Pineta Pinot Nero 2012 from Podere Monastero is naturally not permitted to be named Chianti for obvious reasons. In 2000 the oenologist Alessandro Cellai started to cultivate Pinot Noir, Cabernet Sauvignon and Merlot vines in pine groves (therefore its name La Pineta) near Castellina on an overall surface of three hectares at an elevation of roundabout 500 meters above seal-evel. The soils in his vinyards are dominated by limestone. The Pinot Noir clones from French origin were very carefully selected to fit the natural surroundings of the Chianti region. In 2006 the first Pinots from about 1,5 hectares were produced. Merely 875 bottles!!! Since then each vintage were fermented with natural yeasts in temperature controlled (26° C) Allier vats and subsequently aged for 12 months in 100% new Allier barriques with medium toasting.


The Pineta's colour appeared a bit more garnet-red than ruby red and came with plenty vividly dancing particles in it. Its nose remined me of very clear fragrances of red currant, hints of very dark cherries, some lemon peel, plenty of foilage, pine cones, freshly grounded coffee beans, practically non-existent wormwood and a shy but very distinct Tuscan-Pinot feature which I like to associate with freshly grilled wild boar including its bristles. Sounds not so appealing, but it is. In this Pinot very subtle and highly reduced. Anyhow every nasal component of this Pineta seemed subtle, well tempered and already rather nicely balanced (considering its youth). Its taste went one or two steps further on the quality-complexity scale. At first I was hit with a proper portion of rough, but not too rough, tannin as well as very lively, non erratic, acid. No wonder, it was a young Tuscan Pinot after all. These impressions eased substantially after two to three hours in a decanter. However a firm and very distinctive – though much more integrated – touch remained during the tasting resp. drinking. The fruitful aromas appeared a bit more dark, but equally precise and clear. Herbs like thyme, wormwood, basil, dark olives, blood and boar (no herbs, I know) or pine needles came along very reduced and surprisingly subtle. Same for the much more present autumnal foliage, dark earthiness and fresh-from-limestone-quarry mineral features. Super convincing! The actual structure of the La Pineta made all the difference to other Pinots from Tuscany or Umbria. The structure was very filigree, totally elegant, sublime and downright airy (at least considering its origin, again) with a slight charm of pastoral gentry. No traces of truely rustic or brawny allures. Zero issues with the 100% new Allier oak either. It was a bit present, but this minor impression will perish within the coming years. I am certain! No real need to mention its captivating depth and long finish. Really touching stuff! This is surely very decent ***** to fantastic ****** and most importantly hyper-suspensful different Pinot! A kind a different which I might describe as a tremendously successful meeting of Italy and France (somehow a mix of Morey-St-Denis and Clos Rougeard ... maybe). Ahhahhahh ... vabbé! Questo Pinot nero di Podere Monastero e’ davvero meraviglioso ... fantastico ******! E basta!

Next time I will venture to Moravia and send my tongue on a Pinot trip to the Czech Republic.
Posted by Oh Dae-su at 10:10