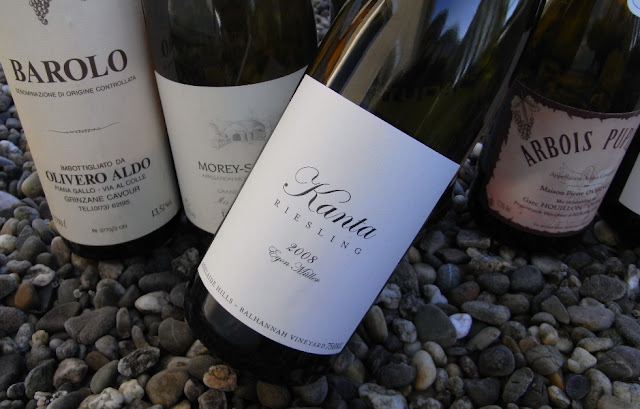 Fo woin friens who arn't veryy familiaa with the Aussie woin speectrum thiis one myght be quoit a surproiis! Ohhh no ... okay, okay I stop my pathetic (and probably quite offensive) attempt to sound like a local. Sometimes it is really hard to find a good start - and you simply come up with bonkers ideas! Today, I most certainly failed! Anyway, the first time I've heard of this Kanta Riesling - it must be about seven years ago - it surely was a big surprise to me. Egon Müller - (one of) the biggest name(s) in the Riesling business – better try to delete the words in the brackets – producing Riesling in the Adelaide Hills in South Australia!? Okay, it is not like that Egon Müller himself is managing the every day business of this project. This Kanta (= sanskrit for beloved) project is actually a joint-venture between Egon Müller from the sacrosanct Scharzhof in Saar Valley and Adelaide's Michael Andrewartha of East End Cellars. So, the main responsibility for today's Riesling was in the hands of Michael. The actual Balhannah Vineyard though belongs to the well known Shaw & Smith wine company in Balhannah. A third party. The soils of the vineyard are dominated by sandy loam over red clay and are set about an average altitude of 420 metres. Spontaneous fermentation and long maceration were also on the agenda. So, let's have our first sip of this very interesting project Riesling ...

The Kanta Balhannah Vineyard Riesling 2008 showed really bright yellow reflexes, seemed still super vivid and showed not significant traces of ageing. Its nose was dominated by mild petrol, impressive smoke, white flowers, shy lime and leftovers of exotic fruit fragrances like pine-apple and peach. In the nose it seemed much more aged than its colour tried to predict. On the second day I got even more refined mineral impressions than the day before. Which was really working very nice indeed! On the palate the mineral characteristics and the lively acid was evident right from the start. On the second day a bit more subtle and refined. Other flavours were petrol, lemon tea and assorted green herbs. Its well fitting and mostly reduced creaminess was quite convincing as well. Most importantly this Riesling never appeared fat, alcoholic or sun-drenched lush. A really very precise, quite subtle and superb (really!) dry Riesling (well, mostly dry). For me most def very decent ***** indeed!

On this evening only wines like Dageneau's touching Silex 2007 (from a magnum), Lafarge's sublime Volnay V.E. 2008, Thomas Studach's super sappy Pinot Noir 2011 and Maison Pierre Overnoy's super versatile Savagnin Arbois Pupillin 2006 were able to surpass this astounding surprise from Down under!

Next time I will take you to Spain – sorry, Catalonia – for another pretty nice Pinot Noir from Costers del Segre.