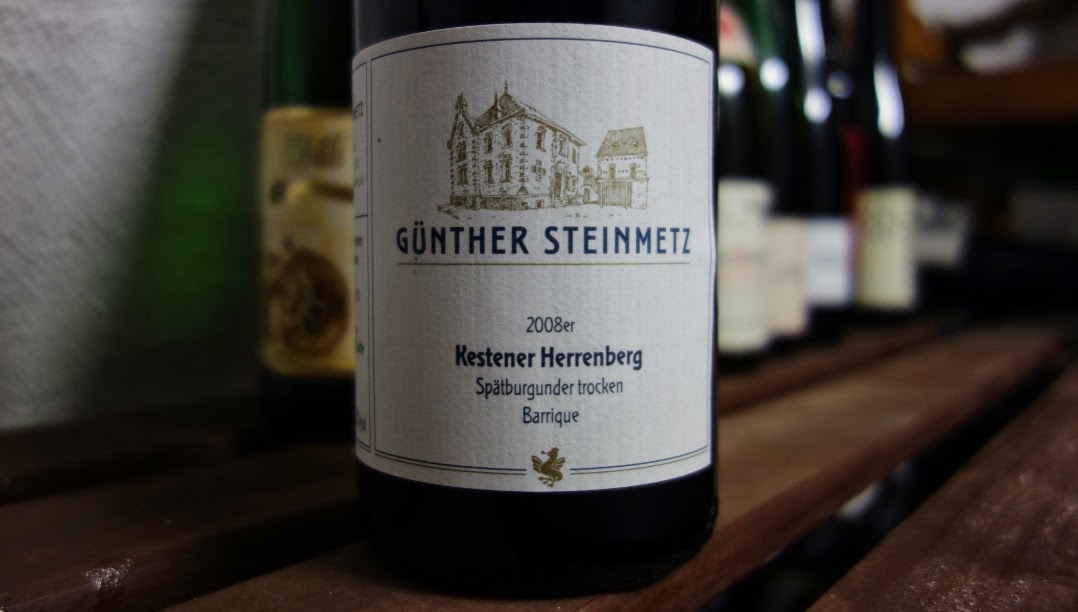 Non stop to next destination of my October'ian Teutonic Tinto Tasting Trip. This time to the place where German wine magic is happening! To Mosel! Probably not so much Pinot magic. For that we got some varietal starting with the letter R. Buuut you never know, right? Let's have a look ...


The Kestener Herrenberg Spätburgunder trocken Barrique 2008 from Weingut Günther Steinmetz emanated a cool, radiant, unusually dark red colour in the core and bold watery discolourations on the rim. Cool and precision might be some rather appropriately summarizing terms to describe the nose of this Mosel Spätburgunder. It was dominated by chilly scents of ripe strawberries fruit, lean and astoundingly subtle smoke, a fine and well proportionate herbal influence and overall fine and earthy leanness. Cold and very integrative characteristics continued on the palate. Its straight fruitful splendour seemed delightfully lean and due to its expectantly lively acid challengingly crisp. A challenge I was freely willing to accept, because it very well managed the obvious trace of residual sugar. Further on I really enjoyed the typical Mosel Pinot - and luckily predominately tart - herbal touch. Actual complexity, profoundness or a remarkable finish weren't the strong suits of this Pinot. Its structure was rather simple and not overwhelmingly enriched with pressure. I guess a rather benefiting factor. In most cases of Teutonic Tinto Pinots such extract'ionism and concentration'ic ways of production appear to backfire a bit. Anyway, for me a solidly decent **** and mostly well balanced Pinot with straight soil characteristics and a lean animating body without a lot of beef. I'd suggest to drink it with some appropriate food, perhaps roast beef or something, otherwise the sheer acid “attack” might spoil some of your gut flora.

So far I had three rather different Teutonic Tintos in a row. Publicly! Privately I had five more from the vintages 2006, 2007 and 2008. All Pinots came from from different viticulture areas ...and all of them have been … well how shall I put it … !? Maybe I should seek orientation-giving aid in a song I just been listening to on the radio (Gershwin/Heyward– Borgy & Bess – etc.). All of those non and never mentioned Teutonic Tintos had “Plenty O'Nuttin” which I am in favour of. Plenty of paralyzing oak, plenty of diffusing sweetness, plenty of nerve wracking jamy fruitfulness, plenty of disturbing alcohol, plenty of frightful uniformity (!!!) and to the outermost plenty of pure boring insignificance (to me, of course)! Such attributes - and my torched money - might be the reason why I am not really motivated to write about those Pinots. I am afraid I need to skip those Teutonic Tinto Tasting notes right away.

Well, perhaps it is just me. After all the song continues with “Nuttin is Plenty for Me”. In terms of Pinot Noir – I guess this assumption might be absolutely right.
Posted by Oh Dae-su at 17:35