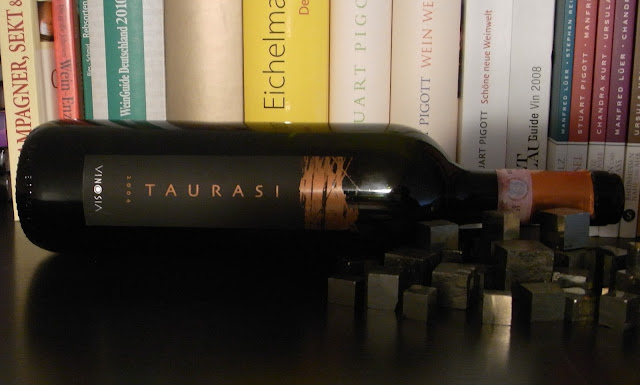 The wine „project“ Vinosia was started in 2003 by the brothers Mario and Luciano Ercolino. Two fellows once well known for their engagement at Feudi di San Gregorio. Most of their wines come from Apulia (Salento region). Anyway, today's fellow comes from somewhere else. Something a little bit closer to my cuore. By the way, I guess I mentioned it a few times before: No fan of Primitivo! Sorry, never had a really decent one. That is probably why I am not so keen on presenting wines from Apulia. Whatever … I digress! Luckily today's wine comes from Taurasi in Campania. Taurasi D.O.C.G. might be one of the most prestigious appellations, some people even call it a Grand Cru, in the south of Italy. This Taurasi, like to my knowledge all Taurasini, was produced by 100% Aglianico. The hilly soils of the village are mainly volcanic and a bit limy. The maceration period took approx. 12 days and was followed by a 14 months ageing in French oak.

The colour of the Taurasi was almost pitch black. Perhaps a bit surprising for a Taurasi, which has got the reputation of a minimally brighter tint (especially compared to Lacrima or a few others). Maybe I got a few indications of minor dark red reflexes!?! Whatever ... the particle-situation seemed very “server”. I just say: plenty of dark solid matter at the bottom! So better watch out! The nose was influenced by strong fragrances of substantially strong dark fruit fragrances (earthy dar cherries and underlying bramble and other dark berries) and plenty of civilized smoke, regional herbs and huge volumes of vanilla ... oak (or the other way round). The taste appeared to me as strong and powerful, but not in an inflated - blown up - or superimposed manner. There was great balance to this wine. It had a lot of everything! Fruit, spice, oak, soil influences, concentration, complexity and fluency, but in a very sophisticatedly tuned way. A wine like that does not come at me too often. I am probably not so much into exuberant redstesr with plenty of power and alcohol (this time no problem either), I guess! Normally such wines have a good chance to end in a fiasco. Nevertheless today in a very decent ***** experience! Before I forget: Already astoundingly silky and equipped with a really damn convincing finish ;-). Tante Grazie!