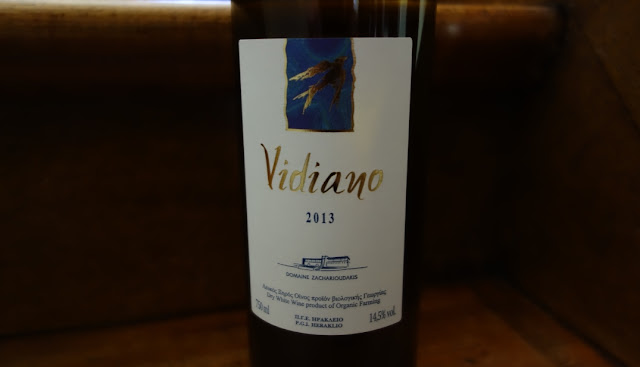 With the following post I'd like to approach the versatile cosmos of autochthonous Greek grape varieties. Like in my previous hyper-auto' “Happening Now Tasting” posts I need to limit myself to just one "pure" varietal. Unfortunately! This time I found it really difficult to choose One from such a rich "national" bounty. Well, anyway … my selection fell on a varietal with rich body, transfixing creamy taste, a diva-like attitude (in the vineyard - mostly), robust juiciness and of course as originally intended minuscule quantities. A varietal often considered as Greece’s version of Viogner. Its name? Vidiano!? Ohh yeeaass, I admit it! Prior to my challenging choice I have not even heard of it (either) …! Vidiano is grown in small scale (apparently just about 70 hectares) on the island of Crete. Especially around the area of Rethymnon and Heraklion. My Vidiano from 2013 derives from rocky, calciferous as well as sloping highland grounds in the area of the Messara Plain south of Heraklion. It's producer? The locally well known and impressively established (check the website) Domaine Zacharioudakis. The grapes for this Vidiano where organically cultivated and underwent an apparently unusual – at least for wines from Vidiano – five months ageing in French oak barrels. Let's check it out ...


5:05 pm (popped and poured and probably a bit too chilly)


Colour: very lush and radiant dark yellow colour with swarming particles; for its high alc with 14,5% a rather wildly jigging viscosity


Nose: rich, lush, tons of fresh well ripe apricots as well as other fruit basket connotations, plenty of well fit smoke, some honeydew and shy caramel; kinda reminds me of a few Austrian orange wines I have tasted recently; there is also very mildly ethereal touch to this one, so far very fitting, I am curious how this impression will evolve; until now a pretty bold, very convincing and illustrious noso'rama


Taste: not as baroque as I've expected it to be, relativly lean body within its actual lushness, plenty of fruit flavours (a bit less exuberant than the nose; or even a bit stern), very distinct smoke and even more distinct and pretty incomparable herbal spiciness; I am under the impression to taste some calcerous seriosity, not as transfixing creamy as I've expected either; here the alc appears to be a bit more present, but still manageable


Nose: in addition to the persisting fragrances there are hints of the actual oak ageing, reserved vanilla combined with strenghening herbal nuances, the fruit is n't as juicy as before but still very remarkable


Nose: besides those mentioned apricots I am getting more and more scents of tart lemons or even bergamot, now the nose seem a bit less exuberant and vital; overall more resting in itself … I guess


Taste: steady behaviour on my tongue; even the fruit flavours remain very present and vital (however still in an austere fashion and definitely not as expressive as the nasal ones), some creaminess seems to evolve as well, even the alcohol is integrating bit by bit

Taste: even a bit more refined than yesterday, the alc touch is still in existence – and still mostly manageabel, still far off being too big – still kinda crisp, the fruit flavours got a stronger tendency towards more tart'sh aromas of lemons and oranges - slightly candied, even its finish improved a bit


Really suprising stuff packed with plenty of distinct character for a "ridiculously" low price. A little bit less alcohol and I'd be really stunned by its quality. I am not sure what to think about this mentioned comparison with Viognier. Most Viogniers I had have been far more rich, beefy, perhaps more complex, even more alcoholic and by far less “graceful”. Anyway, for me this Vidiano from Domaine Zacharioudakis was (and still is, lucky me) a downright very decent ***** new experience.