Something new from a historical landmark: Massandra Cabernet Sauvignon N.V.

My third new post and already a tasting note from a guest! OK, I am not that lazy. I just need some turnover after such a long and dry blabbing phase.

First some interesting facts about Massandra: Apparently Massandra is the oldest and most renowned winery in nowadays Ukraine. It is situated near Yalta on Crimea Island. By the influence of Prince Lev Golitzin, an accomplished winemaker, the winery soared to new and unknown qualities. Their wines were popular and highly demanded all over Eastern Europe and the Russian Royal Family. Then and now the most interesting and demanded wines are the Muscat dessert wines produced from varietals like White Muscat, Surozh Kokur, Rosé Muscat, Black Muscat, Pinot Gris, Bastardo, Ayu-Dag Aleatico, Cagors and Ay-Serez (most I never heard of), as well as their liqueur wines made from the same and some more varietals. The most interesting fact about this winery might be their enormously big cellars with huge amounts of very old vintages. Unfortunately no place for bargains anymore. After the fall of the iron curtain the prices increased drastically. I have been told that the style of their desert wines show resemblances to good Tokaij wines. I guess it is up to everybody personal taste whether to decide this resemblance as justified or not. I have no clue.

The following wine has absolutely nothing to do with dessert wines. It is a non vintage Cabernet Sauvignon. The alcohol was between 10 -13 % (very strange indication) and it was bottled in August 2011. Now we have a short guest tasting note by Marcus Deus:

The colour isn’t all too dark. In the nose there are fruitful as well as earthy austere scents. The tannins are rather present and still hard. Plenty of acid. A very nice and decent fruit potpourri. Shows clear resemblances to a light Cabernet Sauvignon wine. Some hints of mineral features, too. 82P 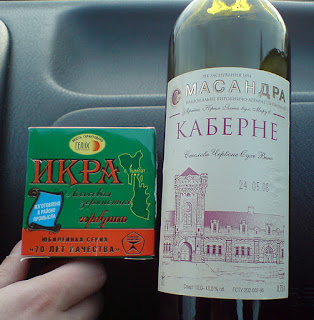 Approx. two years ago I had the same Cabernet. My impression was almost the same. Back then, I was under the impression that the grapes might have suffered under great heat. I tasted loads of raisin flavours. I guess it was a nice and drinkable wine, but nothing more.

The other Massandra wine I had some time ago was far more interesting. Went down very well. Alongside with some rather pleasing and rustic Ukrainian caviar (see photo on the right). Pretty strange combination. I am totally aware of that ;-).
Posted by Oh Dae-su at 10:30