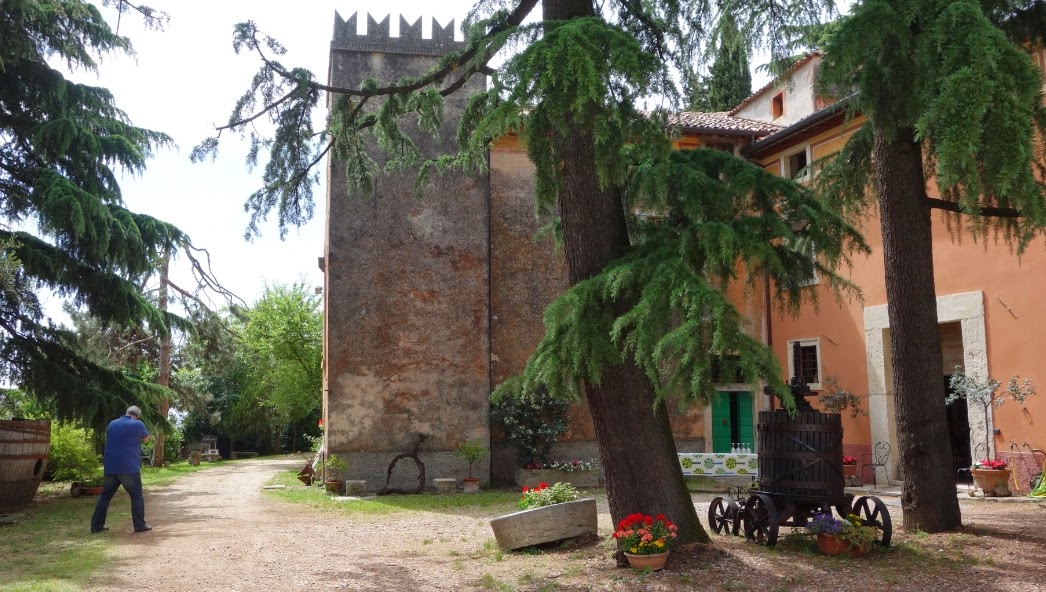 In Part One of “Discovery of Soave” there hasn been quite enough ado about history, agriculture practices, the actual enviroment and probably a bit too much stirring of personal emotions as well. Today I'd like to go straight to the actual matter of interest: the wine! Well, as a matter affect there will be a little bit of ado in form of a short approach to three wineries I have been visiting during my stay in Soave. Don't despair, I'll try to keep it as short as possible. So, off to Castelcerino on the steep slopes of Vale d'Illasi ...

My first stop was at the picturesquely situated Cantina Filippi in Castelcerino. The still vigorously energetic appearing Filippo Filippi and his brother Allessandro have been in charge of their bio-dynamically, spontaneously and predominately stainless'ly oriented 36 ha winery for a couple of years so far. Most of their wines are cultivated on basaltic soil and some calcareous soil terraces on the slopes of Illasi Valley. Straight from the start quality and there own way of thinking and working was of paramount importance to them. This own way of thinking and working might be best described by expressions like unconventional, individual and the attempt to be as close as possible to nature. 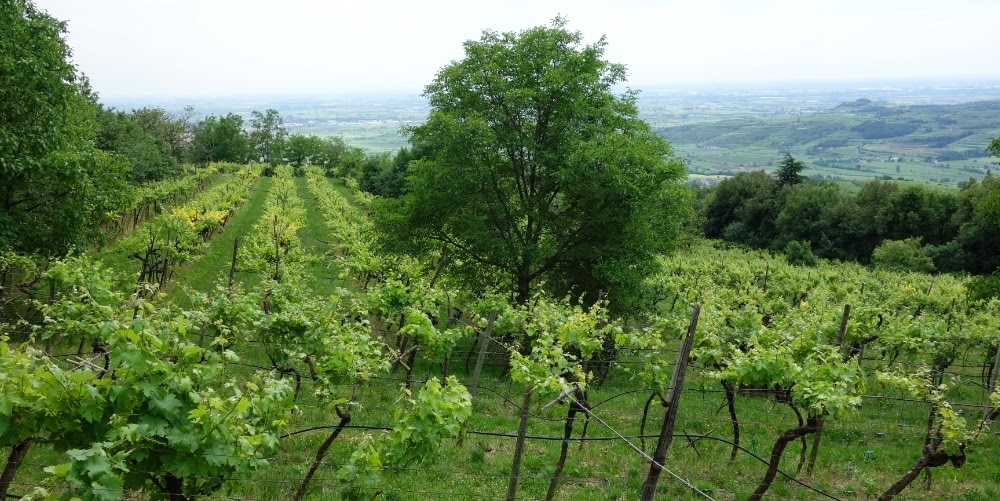 Filippi's first wine was his partly Pergola, partly Guyot cultivated 100% Garganega “Village” wine Castelcerino Soave Classico from 2013. Its nose convinced me with a beautiful whiff of hearty as well as smoky herbs and a very present fruitful supplement of tangerines and mildly resinous lemons. Its taste was really lively, showed plenty of vigorous (and suitable) acid, intoxicatingly gentle and spicy sternness in combination with very respectable lean seeming juicy quaffability. Strange, however very beneficial, combination! Absolutely a decent **** wine for shockingly little money. The Castelcerino 2012 showed (obviously) more ripeness and more pointed structure. Its saltiness was more evident. The rather unique smokey character, as well. The actual body was far more strengthened and, if I may say so, beefy. Probably as a result of the rather hot vintage. Again, absolutely a decent **** entry level wine with clear vintage distinction. 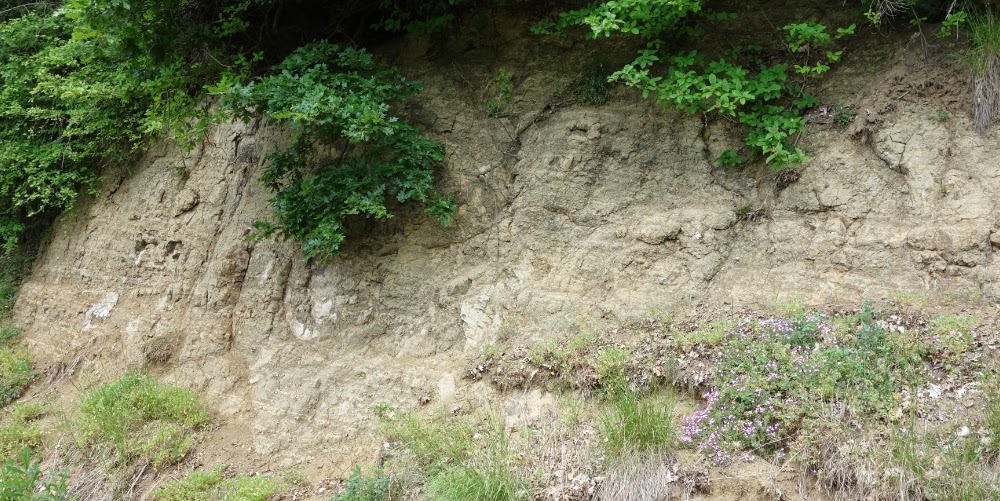 The 2011 Castelcerino Soave Classico appeared to be the most balanced one. There was delicate spiciness, very well aged resinous fruit flavours, fitting firness and a certain elegance to this wine which convinced me (close) to outermost. Even its finish showed more than just respectable qualities. A hint more of pressure to the palate and bit more substance and a very decent ***** wouldn't have a problem at all. Whatever, today I choose not to be petty – very decent it was! The 2010 edition of the Castelcerino showed far more smokiness, pine resin and fruitful characteristics of cooler limefruit. The tart herbal flavours seemed a bit stronger and more “cold-hearted”. Overall a stronger tendency towards herbal aromas and leaner and cooler fruit flavours. Again a distinct vintage variation. Also absolutely decent****. 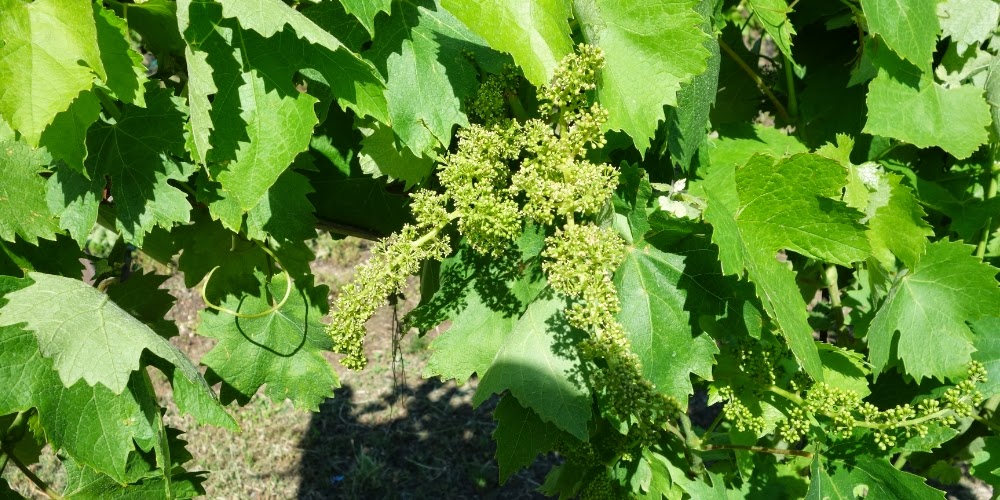 A pretty much different story was the fully Guyot cultivated Turbiana 2012. The Turbiana is a 100 % Trebbiano di Soave from Soave region, but not declared as Soave. The Trebbiano's nose wasn't as talkative as his fellows made of Garganega. It seemed a bit mute, perhaps slightly bright green spicy'ish and possibly a bit more soft than the Soave Classicos. On the palate there was quite a lot of creaminess, a little bit too much alcohol-driven, showed flavours of sweet almonds, some pastry and overall far more nutty than herbal'y tartness. For me a nicely rustic wine without an overdose of enthusiasm. Definitely a good so la-la *** Trebbiano.

The next wine out of the Filippi portfolio was the Vigne della Brà 2012 Cru from a single vineyard in Castelcerino. The Garganega vines for this wine were cultivated in Pergola style on basaltic and calcareous soils at an elevation of approx. 400 m. Their average age is about 60 years. The nose of this firmer wine showed deeper, more elaborate fragrances of resinous and oily fruit (especially tangerines). The herbal touch of the Brà was a little bit reserved. On the palate the Brà was downright more tight and firm, more viscous, more profoundly gripping and full of herbal aromas. The resinous flavours were present, but not as elaborate as the nose might have implied. At the moment there might have been a slight problem with the balance of this sturdy wine. The glycerin touch and the hint of linked sweetness were a little bit too much in the foreground. I am rather sure, this will settle! It is a young wine after all. Right now absolutely decent ****. In the future maybe even more! 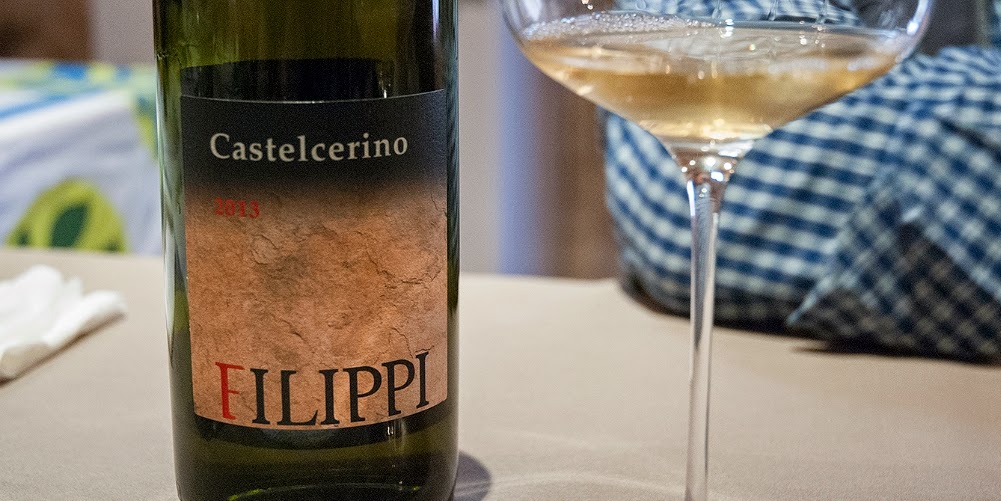 Another wine I very much enjoyed was the Calprea Recioto di Soave from 2009. This very mildly sulfured sweet wine made from 100 % Garganega grapes showed bold and beautiful flavours of marzipan, dried fruits, raisin bread, rock candy and impressively gentle smoke. The - for Recioto - above average acid provided a certain amount of freshness and “leanness” which I liked. Even the alcohol seemed relatively well integrated. A really decent **** sweet wine for little money. A great finish for one of the best tastings during my stay in Soave.

High up in the hills north-east of Castelcerino and Soave you can find the relatively young sub-region of Roncà. Over there dark basaltic soils are the dominating factor for the production of crisp Soaves with character and vitality. On approximately 600 m above sea-leve,l on Mount Calvarina, the young Azienda Agricola Sandro de Bruno (est. 2007) is cultivating a broad variety of grapes in Guyot style. Besides the classical Soave variety Garganega, Sandro de Bruno is cultivating another traditional variety called Durello, which works quite well for the production of sparkling wines. Other more internationally common varietals such as Sauvingnon Blanc, Chardonnay and Pinot Nero are also tackable on their wine-list. 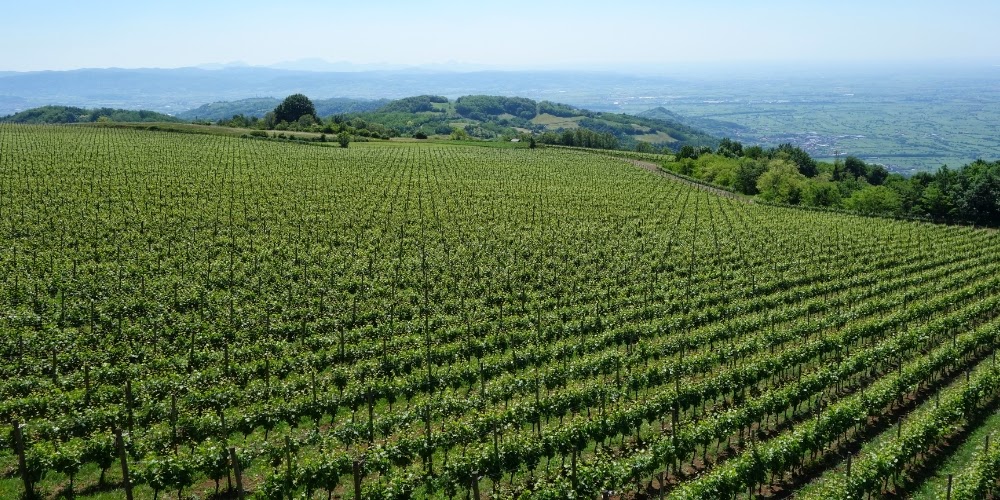 The winery's sparkling wine called Lessini is produced from 85% Durello and 15% Pinot Bianco. All grapes are grown in Pergola style on Monte Calvarina. The Lessini underwent a 36 months long bottle storage period before being disgorged. Its colour appeared rather pale and the mousse showed quite a lot of robust agility. The nose seemed a bit rustic and monotonous. There were nice features of very mild brioche, Christmas'y spices (especially a whiff of cinnamon) and predominately quite a lot of yellow fruits. On the palate the special character of this Durello based sparkling unfolded far better. The unique Christmas'y spices (rather sweet appearing) and flavours of very ripe undisclosed yellow fruits seemed a bit more intense and cunning. Even the flavours of pastry showed a bit more subtle qualities. The mousse was fine. Perhaps a bit rough. For me a pretty interesting and mostly pleasure providing and surely not so intellectually challenging so la-la *** fizz with distinct features. 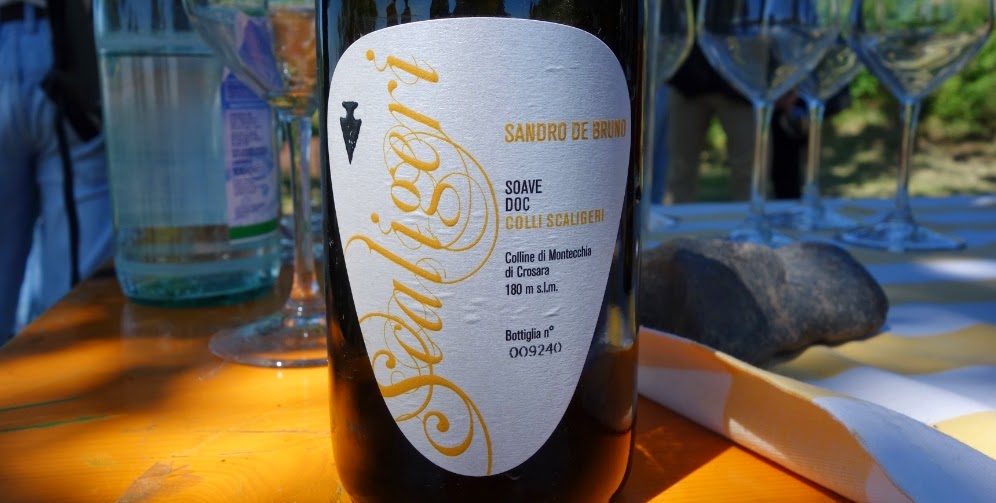 The Soave Classico 2013 called Colli Scaligeri showed more refinement and class. The grapes for this 100% Garganega wine from lower slopes on Monte Calvarina were grown in Pergola style on basaltic soils. Its colour was as expected - rather pale, but showed a bit more "tint" than most of his comparable fellow Soave Classicos. The nose was dominated by lemon'y semi resinous fruit fragrances, slight impression of honey and gently breezy white flowers. There was quite a lot of balance to its nose. Its taste wasn't as refined and gentle as the nose, like in not so few cases of Soave Classico wines, but the balance of the actual flavours was quite pleasing. For me something in between sola-la *** and almost decent ****. My favorite wine of the tasting was a 2007 Chardonnay plus some Pinot Gris from a magnum bottle. This one showed substance, nice civilized oak, no chubby characteristics, clear aromas, again good balance, hardly any aging and fine length. For astonishing little money a really decent **** easy going Chardonnay ++ from Sandro de Bruno's first vintage. 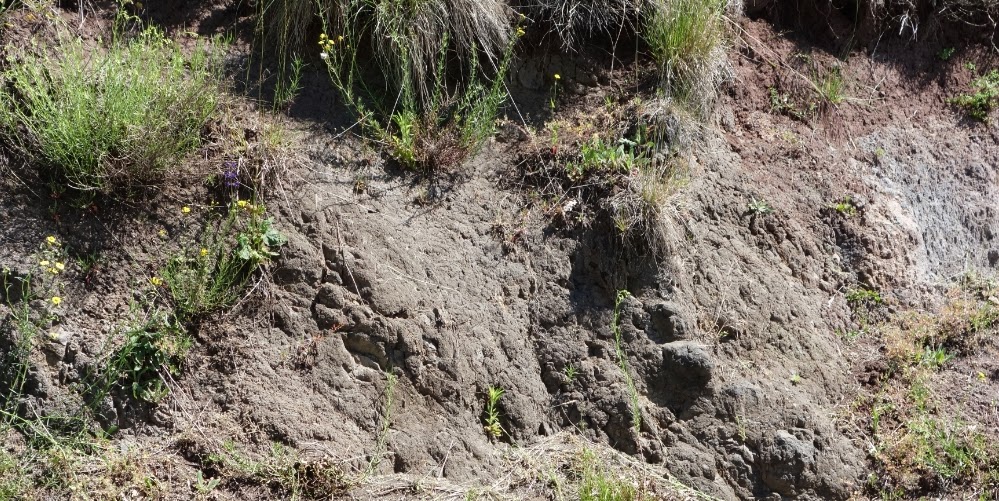 Gelmino and Cristina Dal Bosco's winery Le Battistelle is situated in the steep hills over the village of Brognoligo. The growing of grapes has been a long tradition within the family. Since 2002 Gelmino and Cristina are producing their own Soave wines from a mere of 6 hectares. Luckily, in Brognoligo you can find quite a lot of very different scantly “rich” volcanic soils and some ungrafted very old vines. All wines are solely made from 100% Pergola style cultivated Garganega grapes. All their wines intent to show the lighter and more elegant characteristics of Soave. Of course without being thin or even insignificantly dull. An untertaking which proved to be pretty successful ... 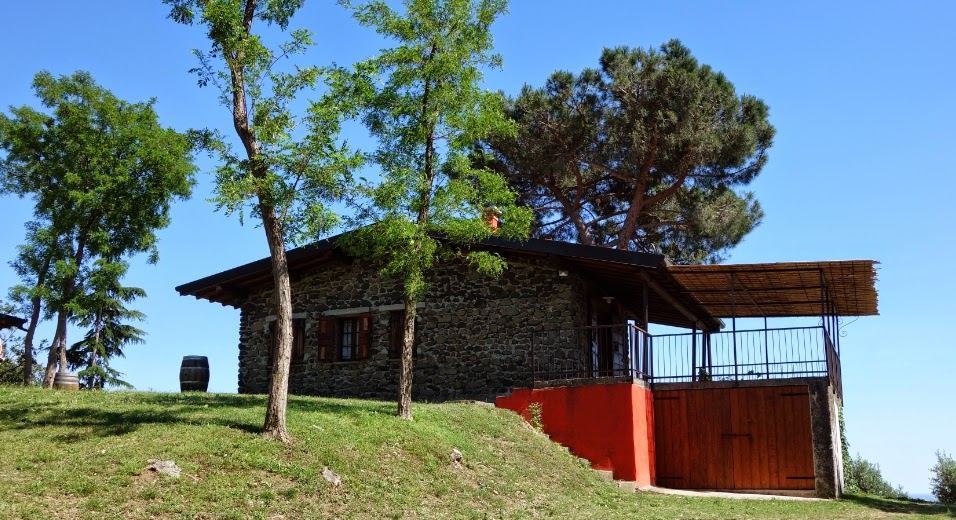 By the way – as you can see on my “limited”-quality photos, le Battistelle's vineyards belong to the most scenic, isolated and steepest in the whole Soave Classico zone. 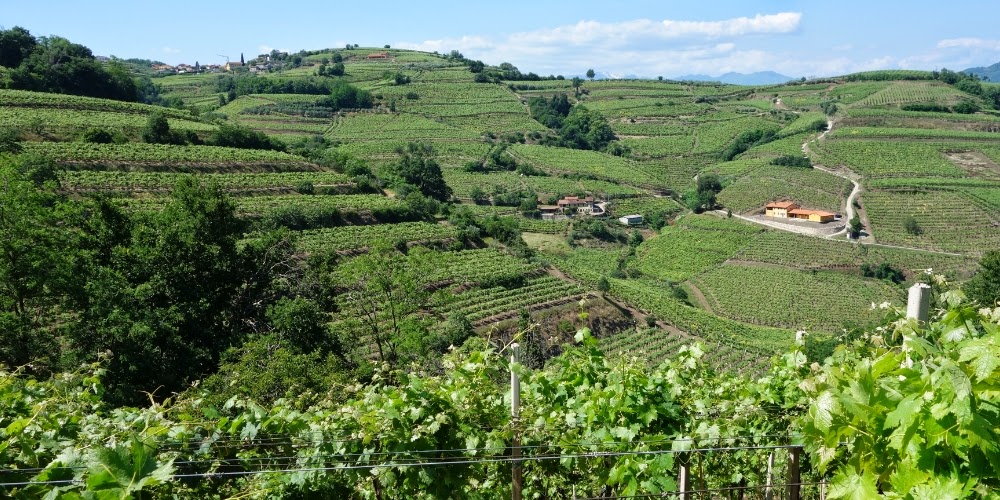 The first Soave Classico I've tasted was the 100% Garganega entry level Montesei 2013 from three different basaltic soils in south facing vineyards of Valle delle Rugate. It's nose was very delicate, slightly flowery and rather shy. Its taste was driven by mild fruit flavours, tamed creaminess and plenty of vividness. For sure a simple, lean and refreshing wine without mentionable density or demand for a very reasonable price. For me still a so la-la*** Soave. 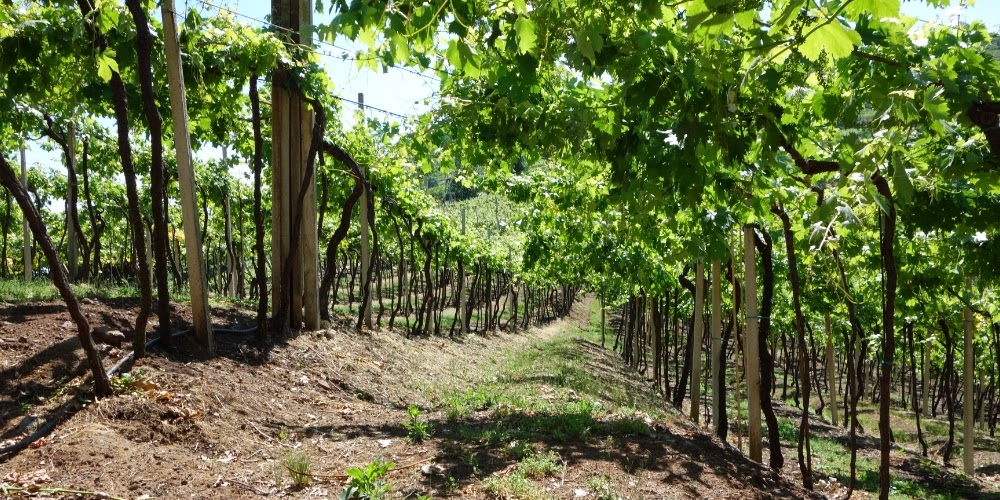 The next wine was Le Battistelle Soave Classico 2012. Another 100 % Garganega from very steep slopes (basaltic and tufaceous rocks) close to the summit of an extinguished volcano. The fermentation of this one took place in stainless steel tanks for about 20 days and was aged for six to eight months on lees. The nose of the Le Battistelle showed more expression from the herbal side, mild lemon scents and distinct flinty features. The taste showed far more substance and density than the Montesei. There were flavours of funky wild herbs, reserved mild lemon fruit, plenty of nice crispness and rather good length. Overall a more serious and more pleasing Soave. Again a very reasonable wine. Even with some potential for a certain amount of development. Something in between so la-la*** and decent ****. The 2011 Le Battistelle showed more developed characteristics. There were riper and sweeter fruit flavours and even more of its “mineral heritage”. Also so la-la*** to decent****. Le Battistelle's Cru wine Roccolo del Durlo 2012 from a single vineyard on Monte Carbonare between Brognoligo and the town of Soave showed the most promising qualities. Unlike the other Soaves this one underwent a 24 to 30 hours cold maceration on the skins after de-stalking. Right from the start it showed a lot of its half-baked youth and reserved strength. Its nose appeared really shy and withdrawn into pupation. On the palate there was more to find out (already). Flavours of resinous lemon fruit, mild eucalyptus, a bit of guava juice, typical spicy as well as tart herbs and a bit of cactus licking (without the spines, obviously). The body was well defined, however still pretty lean for a Cru Soave. I am sure there is some evo ahead. Right now a shy decent **** will do nicely. The Roccolo del Durlo 2011 showed where the evo journey might go to! The nose and taste showed a clear and gripping mineral imprint and far more expressive fruit flavours. Also a surly decent **** Soave Cru. 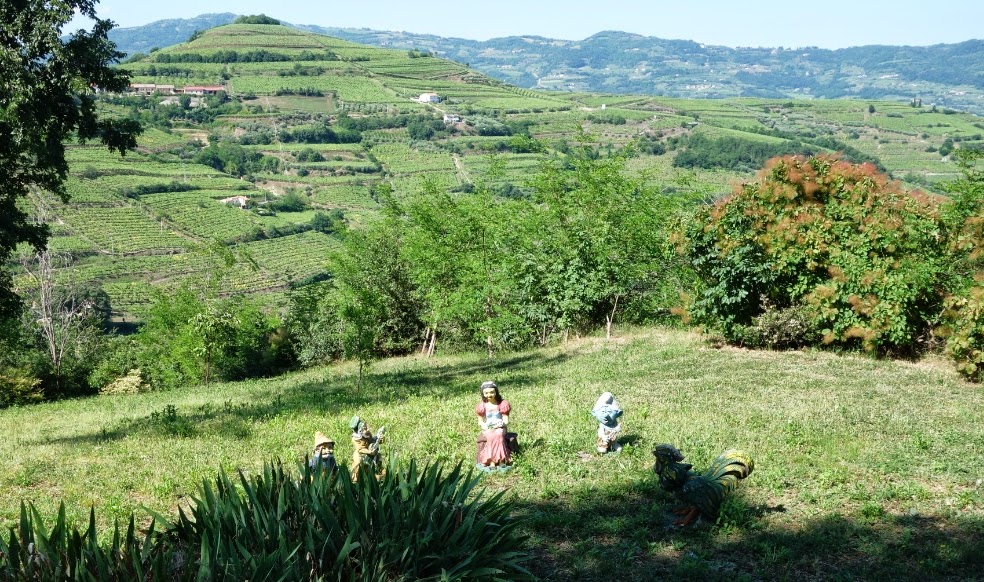 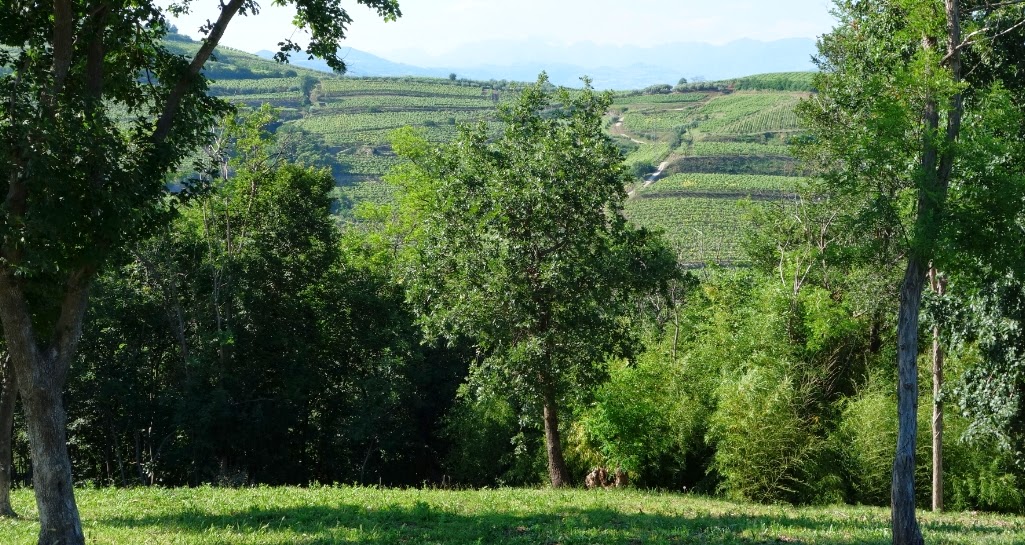 See you in Part 3 of my personal "Discovery of Soave". Then I will introduce you to an Epidome of Soave Cru: La Rocca 2012 from Azienda Vitivinicola Leonildo Pieropan! 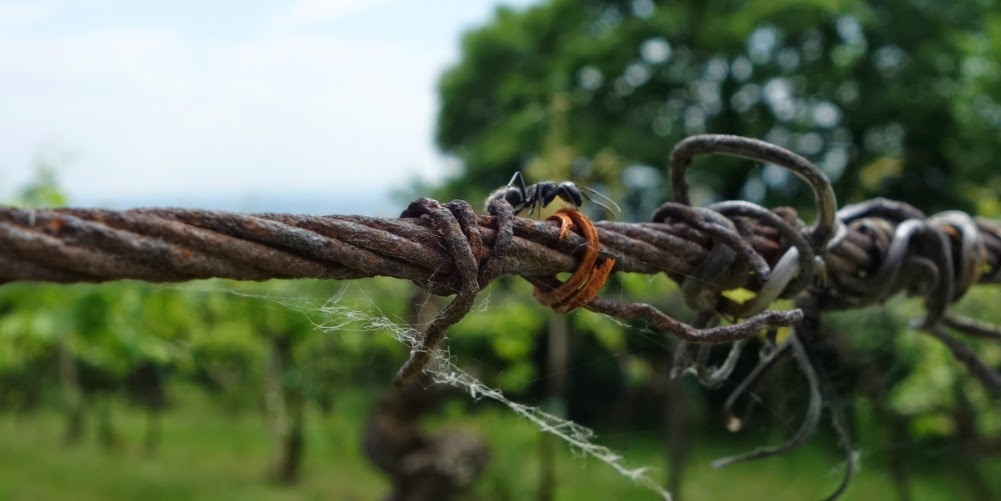