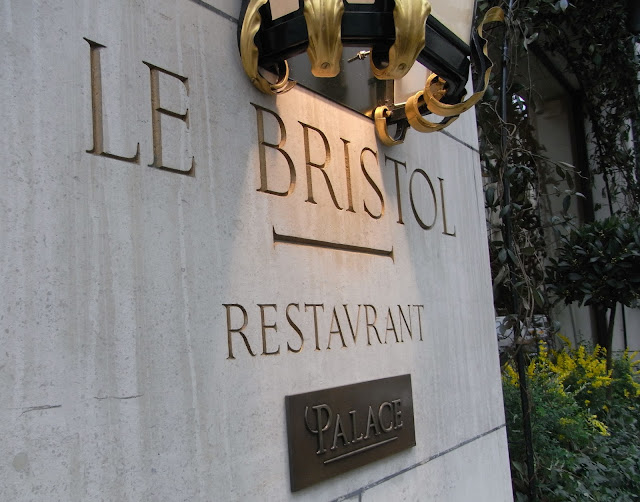 A week ago I had the fantastic opportunity to visit the annually “Les Domaines Familiaux De Bourgogne” Tasting in Paris. The line-up of famous domaines, vignerons and most importantly wines was absolutely thrilling. On the menu? Bourgogne Vintage 2010 and some additional wines from 2008.

In this post I'd like to keep my impressions excessively an of course insufficiently short. To make it more concise and understandable I'd like to use my adequately familiar, and surely questionable, rating system.

I guess it is very hard to emphasize particular wines or wineries! The amount of excellence was pretty overwhelming and the prospects of the 2010 vintage seemed and seem very good (in the upper class - for sure)! Let's do it the conventional way. First white, then red: 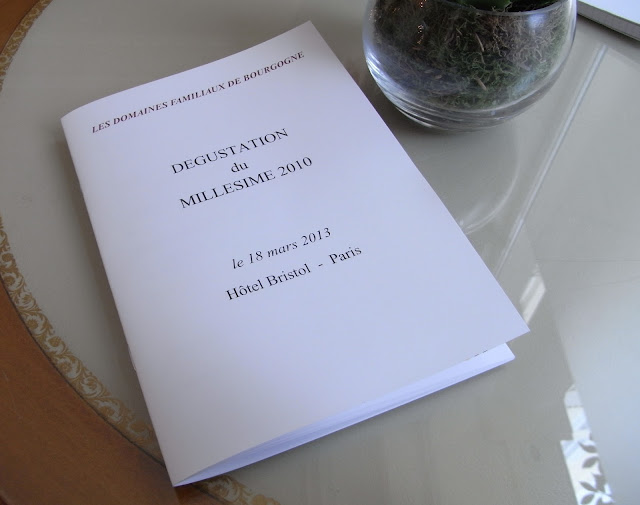 What else could be better to start with than Chablis? The wines of the Domaine Raveneau are adequately familiar to all of us. All presented Chardonnays showed fantastic ****** to semi-celestial ******* quality and complexity. Surprisingly, the Chablis 1er Cru Butteaux did not appear that unapproachable and sleepy. It showed very floral, elegant, even a bit charming and tasty features. The Chablis 1er Cru Montee de Tonnerre was my favourite. It showed a lot of substance, sublimity and deep gaunt mineral character. Even the fruit wasn't that disguised like one might expect it to be at such a young stage. The Chabils Valmur Gand Cru seemed a bit more reserved, powerful and softly fat than the others. Anyway, plenty of wonderful perspectives for a distant future. The Chardonnays of the Domaine des Comtes Lafon showed equally impressive qualities. The Meursault Village was rather fruitful, a bit tender (not much, it was a Meursault after all), soft and charitably tasty. A more than just very decent ***** start. The Meursault Clos de la Barre and Meursault 1er Cru Charmes showed more seriousness, preciseness, more oak, more tension and definitely more flesh. Both wines seemed pretty fantastic ****** to me.

The Corton-Charlemagne Grand Cru from Domaine Bonneau du Martray was, as usual, rather pithy, highly profound, rustic and powerful. To me it showed a very decent ***** potential for a long and vivid life. The performance of Domaine Leflaive's Puligny-Montrachets appeared a bit mixed to me. The Village seemed a bit very filigree (or very lean), slightly boring, weak and not really convincing. The 1er Cru Le Clavoillon showed more substance and potential, but left a pretty one-dimensional impression. The 1er Cru Les Pucelles showed far more character, length and substance. Most definitely a fantastic ****** experience. However, my most favourite Puligny came from the Domaine de Montille. The Puligny-Montrachet 1er Cru Le Cailleret had a lot of freshness, elegant fruit, complexity, strength and admittedly far more accessibility. Surely a very decent *****, if not fantastic ******, Chardonnay. The Meursault Village from the Domaine Pierre Morey had its very decent ***** qualities. Not doubt about that. To me this style of Chardonnay is a bit too brachial, powerful, warm and perhaps chubby – but definitely complex and impressive. The Batard Montrachet Grand Cru from Domaine Faiveley seemed very reserved and a bit bored. To me very hard to “calculate” its future evo. The last mentionable and very delightful 2010 whites came from the Domaine de Villaine. The Aligoté Bouzeron and the Bourgogne Côte Chalonnaise Le Clous had a lot of freshness, softness and plenty of affectionate nature. They weren't that complex or grand, but showed very decent ***** qualities indeed. 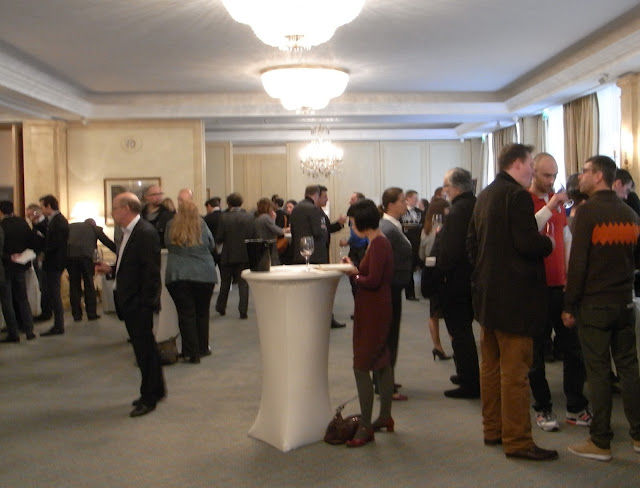 And now the important stuff! Le Pinot Noir: Let's start with the wines of the Domaine J. F. Mugnier. To me, the most impressive collection of the day. The fineness, clarity and elegance of the presented wines was breathtaking. Even the “small” Chambolle-Musigny showed more than just very decent ***** and highly distinct qualities. The Musigny Grand Cru was totally beyond comprehension. What a celestial ******** piece of work! An almost perfect combination of depth, grace, clarity, length and vivid serenity! Probably the wine of the day! The collection of the Domaine Armand Rousseau was equally inspirational. The Gevery-Chambertin 1er Cru Clos Saint Jacques and the Chambertin Grand Cru presented themselves so elegant, full of life and pure – just amazing. I guess I never experienced those wines in such a semi-celestial ******** to celestial ******* condition (resp. potential). I find it hard to compare them e.g. with the 2005 vintage I tasted a couple of years ago and to different. It is just far too long ago, but the fineness and excitement in those 2010ers were definitely convincing. Let's stay in Gevery-Chambertin for a moment. Trapet Père & Fils Chapelle-Chambertin Grand Cru and Chamertin Grand Cru were totally impressive as well. Compared to the Rousseau wines they appeared a bit less elegant and sublime. The overall impression was equally good. Their wines were a bit more hearty, stronger, lime'y and probably a bit more native. Absolutely semi-celestial ******* qualities.

The wines of the Domaine G. Roumier seemed a bit more restrained, hard, dark and acidic right now. Anyway they surly showed their qualities, too! From the very decent ***** Chambolle-Musigny Village to the semi-celstial ******* Bonnes Mares Grand Cru there was not a trace of doubt about their quality and prospects. The earthy, slightly wild and as usual pretty tannic wines of the Domaine Dujac shined with outstanding performance. The Vosne-Romanee 1er Cru Les Malconsorts and the Clos de la Roche Grand Cru appeared as an absolutely positive epitome of strength, tartness and mineral-o-rama which just started to show their fantastic ****** potential for the most definitely not so near future. Same - and of course different –, same concerning the rather classic approach, were the wild, untamed, profoundly gripping, very lively, fruitful and hyper-juvenile Nuits-Saint-George 1er Crus from the Domaine Henri Gouges. The peak of the collection was – what else could have been – the Nuits-Saint-George 1er Cru Les Saint-Georges. Just fantastically ****** fresh, subtle, mineral'ish and surprise surprise not that shockingly stinky.

The Volnay Collection of the Domaine Marquis d'Angerville appeared, I dare to say, as usual: rather restrained and acidic, but due to the tension and structure very promising indeed. The fantstic ****** Volnay 1er Cru Clos des Ducs was definitely beyond any shadow of doubt. As always an infatuating combination of elegance, buoyancy and strenght. In terms of Volnay, I was equally excited by the Domaine de Montille's Volnay 1er Cru Les Taillepieds. It was far more accessible, perfumed, firm and aromatical than the d'Angervilles. To me a more than just very decent ***** Volnay. Michel Lafrage's Volnay 1er Cru Clos des Chenes seemed very decent ****** as well. Maybe a bit too “spicy” and acidic to be a fantastic Volnay. Hard to asses. The future will tell! The presented wines of the Domaines Jean Grivot and Meo-Camuzet were surely different but also a bit alike. My overall impression told me: a rather modern house-style, a bit more fruitful fruit and warmth oriented as well as not so far away from accessibility. At least concerning the “simple” Villages wines. Both Clos de Vougeots were very lively and very attractive. Especially the fresh and already almost silky one from Meo showed fantastic ****** potential. The tasted Nuits-Saint-Georges 1er Cru Murgers (Meo-Camuzet) and Nuits-Saint-Georges 1er Aux Boudots (Grivot) boasted with plenty of strength, lively acid and definitely not a lot of wild rugged NSG character. In this more modern'ish regard, I'd like to mention the nicely accessible, pleasant and gentle wines from the Domaine Tollot-Beaut. From the Corey-Les-Beaune Pièce du Chapitre to the Corton Bressandes Grand Cru all wines convinced me with their very decent ***** seductive appearance and gentleness. The acid seemed not that strongly present. Very decent qualities, maybe not so many edges, for not so much money. Bruno Clair's Marsannay, Savigny-les-Beaune and Gevery-Chambertins (including Chambertin Clos de Beze Grand Cru) presented themselves very reliable (mostly very decent *****) and not that overwhelmingly challenging. A rather modern, juicy, dark fruity and dense. A surely modern approach as well. Overall similar impressions were left by the Beaune 1er Cru Clos des Mouches and Grands Echezeaux Grand Cru from Domaine Joseph Drouhin. Both wines were definitely very decent *****, but especially the Grands Echezeaux appeared a bit chumming up, warm, not so mineral driven and fruity sweet'ish. Rather unusual for a 2010 from such a grand champ. To conclude my Pinot Noir impressions I really would like to highlight to wines of the Domaine Simon Bize. Both tasted Pinots, the Savigny-les-Beaune “Les Bourgeots” and the Savigny-les-Beaune 1er Cru Les Marconnets showed a hell of a lot character, earth, darker wild'ish fruit, freshness and a lot of substance. Especially the fantastic ****** impression by the 1er Cru was very surprising and intriguing.

I suppose the most adequate finalization of such a grand tasting were the slightly aged wines from the vintage 2008. For those 2008s and all the other wines I'd like to refer to my equally short and insufficient Cellartracker tasting notes: HERE! 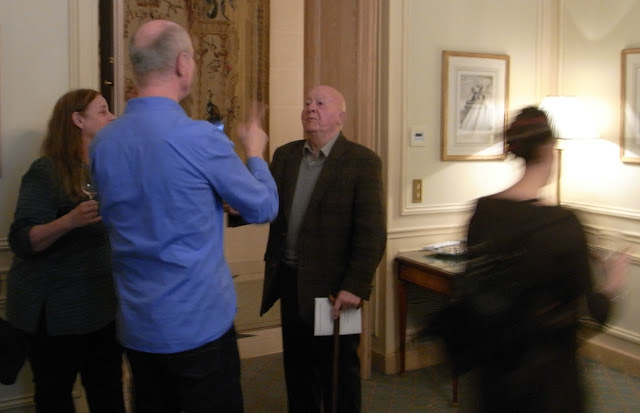