This time I got a wild mix of three very different wines for you. I suppose it wasn’t the best idea to have them at the same time ;-). Whatever, at least it wasn't intentional! More a bit later ...
It was a cold climate Pinotage from Walker Bay, the Trentino Classic named "Granato" from Elisabetta Foradori and another classic, this time from Stellenbosch, the Thelema Mountain Vineyards Cabernet Sauvignon. 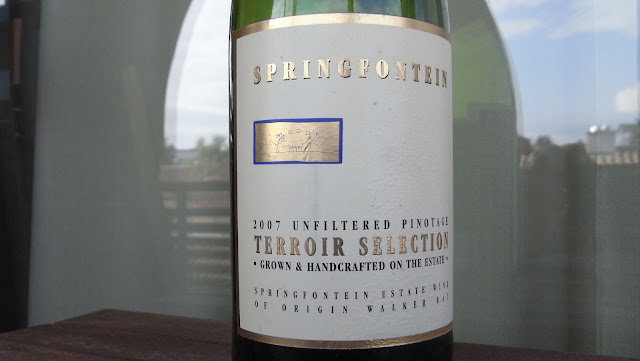 A Pinotage the way I like. Not as alcoholic and weirdly fermented as so many of its siblings. Far more characterized by Pinot and less by Cinsault. I guess, it also benefitted from Walker Bay’s colder climate and the thorough work in the v-yards. For my palate a pretty rare occasion!

The colour was really tinted black-red with just a few luminous reflexes. Some brown discolorations on the rim. The nose was really juicy and full of ripe dark cherries. Besides that I got impressions of almost elegant smoke (pretty rare in Pinotages), some plums and other hardly boiled fruits, hints of black shoe polish and some cold cigarette butts. Okay the cigarette butts weren't that fantastic, but the rest was really nice. The taste was a bit, just a little bit, Pinot’ish from mummy. Daddy Cinsault didn’t not interfere that much. I think ... not so bad ;-). Further on I got juicy flavours of various red berries and dark cherries. A lot of fruit with certain warmth, without being hot or jamy. Other flavours came from dark pepper and slight tobacco. The acid provided a relatively lean and accessible body. Not a complex or super-fulfilling experience. Anyway, I guess it might get hard to stop yourself from pouring another and another and ... glass. Right now is a really good time to kill it off! 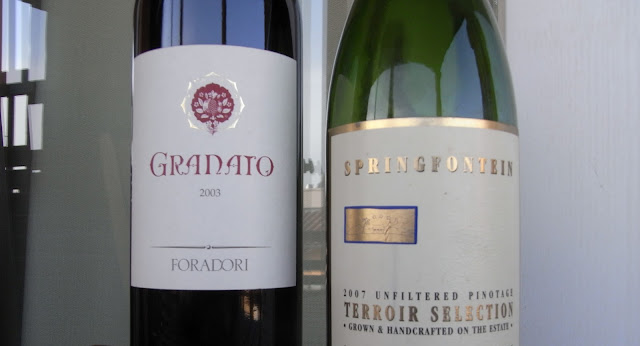 The nose of the Granato had some eucalyptus, apple must and after approx. 4 hours sleepy retired blueberries, plums and impressions of upmarket bacon (fried). Somehow it seemed a bit hesitate’ish and maybe drowsy or even slack. A bit unusual for such a wine! However there was a decent amount of complexity and perhaps even grace. The same for the taste! The content of this bottle appeared to have a robust tannin structure, a lot of edges, mild acid, reserved fruit of blueberries, fair depth and not a lot of tension. Maybe something wrong with this bottle!? Maybe a 2003 problem! Dunno! This bottle wasn’t a grenade at all, but a decent wine for far too much money!

Due to the Granato disappointment another decapitation had to take place that evening. The colour of the Thelema was already quite red-brown and really murky. The nose had tons of green paprika, other unripe and austere green spices, bitumen and plenty of Burmese tobacco. At first I thought it had to be flawed by cork, because on top of the already mentioned attributes I sensed a specific bitterness. Well, I’ve been told this special property was normal for the 2003 Cabernet Sauvignons from Thelema. So, let’s leave it that way and continue. The taste was very robust and damn dry. Hardly any typical fruitful flavours (maybe some hints of black currant)! Green paprika, black pepper, dried bright brown earth and a tough acid provided this Cab with an austere, slightly harsh, very long lasting and cheek piercing character. On the second day a bit more tamed. Oh, by the way, on the second day I did not feel or taste any flaws in this Cab. Whatever, the Thelema surely had a consistent and well proportionate body with an significant amount of complexity and a profoundly gripping style. No regular treat for your taste buds, definitely no “New World-Sweet'ish-Delight” and absolutely no wine for average ladies (sorry for those stupid generalizations). It was a tough cookie which I enjoyed (maybe not the correct description for such a wine?!?)!